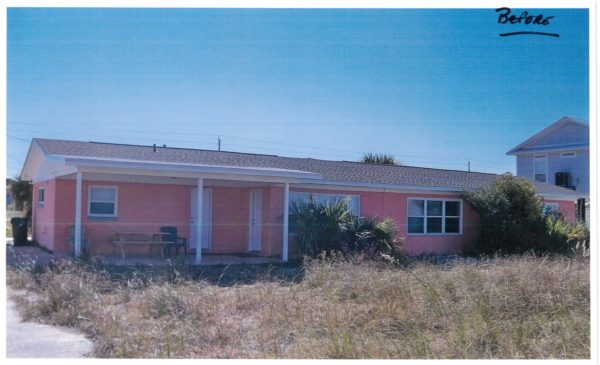 This is a typical older home on Santa Rosa Island—built on a concrete slab at ground level. Below, the home after being raised above the expected flood level on pilings that allow waves and storm surge to flow beneath the structure. Courtesy Santa Rosa Island Authority

“I’m always looking for the credit points to get us to the next class,” says Paolo Ghio, Director of Development Services for the Santa Rosa Island Authority, in the panhandle of Florida. He thinks of the Community Rating System as a reward program aimed at saving lives and also as fiscally sound way to reduce flood damage. “These are the benefits I communicate to promote the CRS to the Authority officials and to the Planning Board,” he adds.

Santa Rosa Island is a barrier island owned in part by Escambia County and governed by the Santa Rosa Island Authority. It is connected to the mainland by two bridges and encompasses beach recreation communities of about 1,500 full-time residents—swelling to many thousands during the vacation season. Only a few feet above sea level, it is highly vulnerable to hurricanes, wind, waves, and tidal surges.

“The first thing I noticed about the CRS when I came to work here was that it was very restrictive to earn credit,” he says. “But the more I studied the CRS Coordinator’s Manual, the more it made me realize the actual dangers from storms that exist when you live on a barrier island.”

After Hurricane Ivan caused so much damage in 2004, the Santa Rosa Island Authority adopted a 3-foot freeboard standard and, although the community has both V Zones and A Zones, in 2012 it adopted a requirement that all residential and commercial structures be built to V-Zone standards, which are even more restrictive.

“The Planning Board pushed back at first,” Paolo says, “because of concern over how much it would cost individuals to implement.” He successfully argued the case for adoption by pointing out the long-term savings to the property owner—first because there would be less damage during storms, second because individual premiums would be lower because the building is higher, and third because of the CRS discount earned by adopting higher regulatory standards. The community also has a 10-year cumulative substantial improvement section in its ordinance.

“We get practical rewards and financial benefits from the higher standards that the CRS credits,” explains Paolo.

“Bit by bit, we are elevating our older slab-on-grade structures. We have about 125 still left in the community,” Paolo says. Their flood insurance premiums can range from $5,000 to $25,000 annually and are still going up.

“I tell the owners of these buildings, you have three choices.

“One, you can cancel the flood insurance if you don’t have a federally backed mortgage. But you still have the risk of a total loss and then you’ll have no insurance to rebuild after flood damage.

“Two, you can pay the insurance premiums and at the end of four years you will have spent $100,000 and you will still have the same risk with potentially higher premiums to come.

“Or three, you can take that $100,000 and elevate your structure. Then, right away your risk is substantially reduced, and so are the premiums. In about six years you’ll have your original $100,000 back.”

The third option turns out to be a huge selling point,” Ghio notes.

“Every year we host a public workshop for owners of Severe Repetitive Loss properties to let them know how about Flood Mitigation Assistance Program grants from the Federal Emergency Management Agency,” Ghio explains. In 2012 the Santa Rosa Island Authority got a grant for $2 million that contributed to elevating eight homes. In 2014 another $2 million grant was targeted for nine projects that call for demolishing the existing structure and starting fresh with on-pilings new construction.

“We started working on the Program for Public Information (PPI) element in anticipation of our five-year CRS cycle review,” Paolo says. A consultant helped them navigate the CRS changes that went into effect in 2013, and particularly the PPI.

Following the procedures in the CRS Coordinator’s Manual, the community formed a PPI committee that then assessed the public outreach needs. Priority “audiences” were identified, and the flood-related messages they needed to receive were formulated. The committee also listed what “outcomes” were desired from people’s having received the outreach messages.

For example, one target audience in Santa Rosa Island is “owners of slab-on-grade buildings.” The PPI Committee decided that those people should receive two messages from the community: first, “See us about federal grant opportunities for elevating your home.” And second, “There is a relationship between the level of expected damage and the cost of your flood insurance.” The PPI Committee specified that the desired outcome would be having buildings that are elevated, with the proper flood openings.

Because there are so many visitors, another priority audience for outreach projects includes visitors and renters. The message is, “Use the dune walkovers—dunes are our first line of defense in a storm.” The desired outcome is dunes that remain undamaged by people from year to year.

To get the messages out, Santa Rosa Island’s PPI lists 19 outreach projects and services to be done during the year by the staff, its partners, and various stakeholders. The projects include mailings; articles in special newspaper issues for hurricane season; face-to-face meetings; email notices through the many homeowners’ associations, condominium managers, and rental agencies; workshops on mitigation and funding; websites, and others.

The PPI calls for the desired outcomes of the messages to be evaluated each year by the PPI Committee, to see whether progress is being made and, if not, to determine how the outreach should be changed.

In conclusion, Paolo says, “We’re a small community. The CRS provides us the motivation to get out and talk to our citizens one on one. They get a better understanding of what we are trying to do to reduce flood losses, save lives, and reduce premiums. It creates an atmosphere of acceptance.”

Editor’s note: This is just a snapshot of the Santa Rosa Island Authority’s floodplain management program. For more, see the County’s website.